My home in Dallas, TX. where I grew up will always have a special place in my work. In growing up there, my childhood was filled with animals, woods and lakes, and open spaces. My strongest connections with nature began when I was playing in this yard. 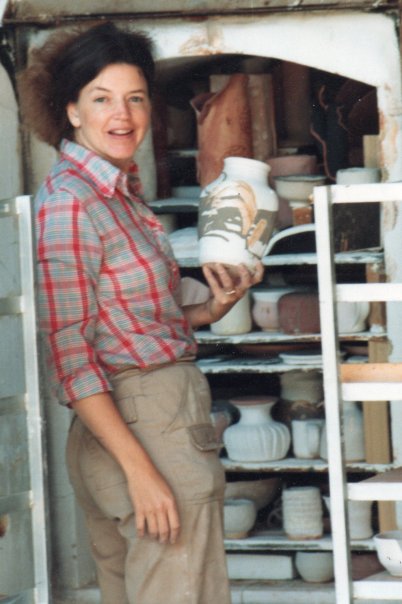 This is my mom and dad when they were starting out as artists. My dad began by carving the Vinyard Bay Doors in Austin, TX. My mom is seen here unloading a kiln when she was close to my age. It is always inspiring for me to see how my parents have grown into successful artists today. They are always so supportive of my choice to be an artist too.

National Geographic photography has been inspirational to me since childhood. I always find that these photographs capture what I love about nature. Patterns and colors, the beauty of the animal form, and the humanity that can be found in animals.

I have been reading animal encyclopedias since I was very young. It seemed that I could never learn enough about all the animals I could find. I still use these books in my studio today. They often help me learn more about animals I want to make, or discover new animals, and study them more closely.

Walton Ford’s large scale watercolors reference those found in biology or botany illustrations. Their physical size gives them an overpowering presence reminiscent of the endlessness of untamed nature. They often depict animals performing acts that would be deemed unnatural, if the animals were not so realistically rendered.

This sculpture is currently in Philadelphia. Titled, “A lion crushing a serpent”, it was made by Antoine-Louis Barye in 1823 in Paris France. The intensity and ferociousness of the lion’s expression emphasizes the predator’s gaze. Each muscle is carefully described, and then exaggerated in such a way that gives the lion an immense strength.

Bertel Thorvaldsen was a Danish romantic sculptor. This monument, called the Lion of Lucerne, commemorates the massacre of Swiss soldiers during the French Revolution. This piece is also an excellent example of romantic sculpture, which conveys emotion and uses the power of nature around it to emphasize the idea of remembrance.

Beth Cavener Stitcher’s very large animals in clay were my first exposure to clay sculpture. Her large scale building techniques, as well as surface treatments, and subtle exaggerations of the animal form are a constant obsession for me. The way she has pushed the boundaries between the animal form and human mind is stunning.

Nick Mackman is an artist that I recently discovered among the many current ceramic sculptors who study the animal form. She draws inspiration from her work as a rhino keeper and her experiences on safari. I especially enjoy her use of hair and wires as well as stains to produce a very realistic and unique animal portrait. She chooses to portray animals as one might portray a person. Each piece has its own feelings, and its own personality.

Ovidio Giberga creates a dynamic contrast in his sculptural works. In this series he combined the ferocity of native North American animals with the restraint and control of dental appliances, retainers and other devices added to their teeth and open mouths.

Tanya Brett creates a very interesting worked surface on the various animals she makes. Her application of simple oxides to emphasize the subtle variations of her surface creates a beautiful contrast. Her influence from her own drawing background also makes her pieces unique. 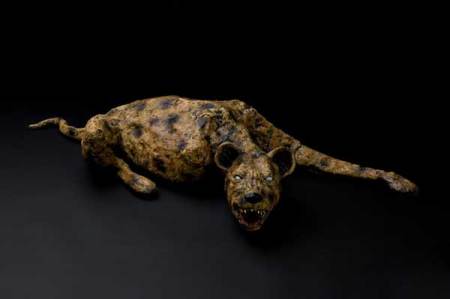 Roxanne Jackson’s animal figures often reflect an ambiguous nature. The hyenas especially show an intense gaze, combined with a subtle naturalistic surface. Her pieces emphasize the contradictions between the power and the vulnerability of the animal world.

Adrian Arleo’s figurative work is intriguing to me because of the way she combines surface texture with form and concept. The visual patterns created by the surface texture often enhance and change the way the form appears.