Setting the Scene: Graduate Research on the Picturesque Aesthetic

This year I have been researching the picturesque aesthetic as applied to displays for my ceramic sculptures. At first, the term picturesque was applied to both a real landscape that was “fit to be made into a picture”, and the painting that depicted that landscape. 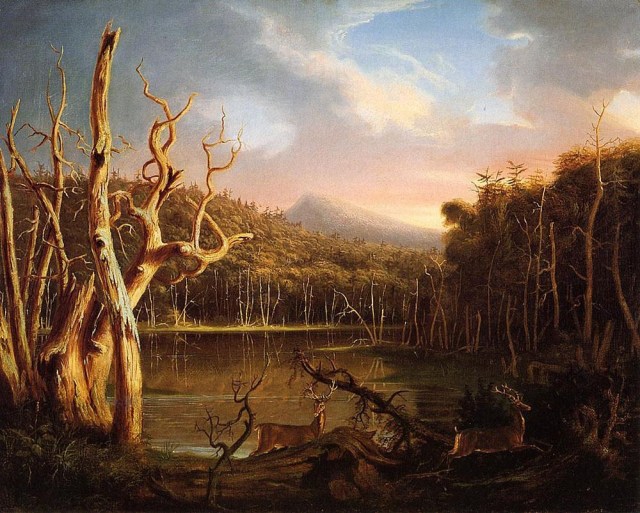 The intention of dioramas in natural history museums is to educate and entertain, while preserving a snapshot a specific animal and its habitat. The history of the diorama is a long one, and the earliest dioramas were connected with the first movements in environmentalism, and the creation of the national parks.

These distinctions can also be made about the picturesque and the sublime. Zdeněk Burian is one of my favorite paleoartists, he was Czech, and illustrated many books on prehistoric life in the 1940’s. His reconstructions had a major impact on paleontology at the time, they gave visual clues that helped inform scientific theories. The idea of a prehistoric world at first seems more sublime, nature run wild, unchecked, enormous, and overwhelming, even terrifying to a human. But Burian’s work is in the picturesque mode.

These are pleasurable windows into the past. The wildness has been softened, idealized, and made to be inviting. The scene frames the action of animals, as though they are actors in a play. The animals are intelligent, realistic, and wonderfully strange. The illusion is convincing, as if you could dream yourself there, and strolling through the ancient past would be like strolling through a meadow. The idea of picturesque travel in the eighteenth century was meant to arouse emotion through nature, and suspend thought. This experience of nature is felt, not analyzed.

Pierre-Denis Martin, 1714
The Fountain of Apollo and the Grand Canal at Versailles

This way of viewing nature came about in the eighteenth century, along with the influence of the English garden in France. At first, nature at Versailles was controlled, as was everything in the world, by the king and the ancient regime. Geometry, symmetry, and parallel lines ruled over all. But as the picturesque view of nature gained popularity with the new regime, it led to gardens that were full of surprise and greenery allowed to grow freely, and aligned itself with the freedom and fantasy of the Rococo style. Theaters gained popularity as a mode of escape from daily life. Claude-Henri Watelet said, “The garden was valuable to the extent that it sustained a state of wonder.”

As the popularity of extravagance and distraction grew, the aristocracy lost control, and fell to revolution.

The overgrown classical ruins and fabriques used in the picturesque style idealize the past, but at the same time foreshadow the cyclical nature of history and time, and the inevitable rise and fall of civilization. They represent the idea of nostalgia that was popularized during the eighteenth century. 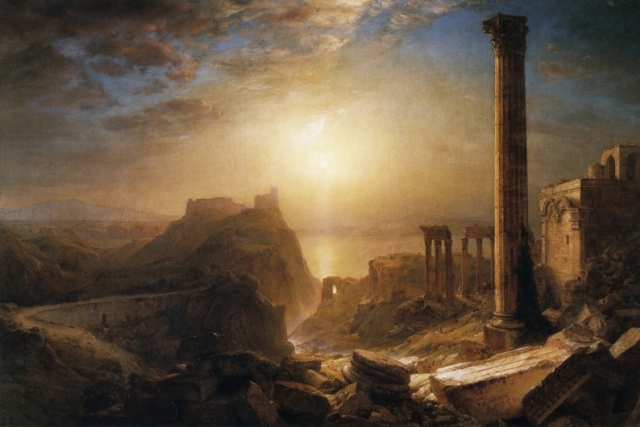 These partially hidden structures are designed to trigger the imagination, and a longing for the past. This in itself is an illusion, because while the past may seem glorious, it often was not. There is an interesting contradiction that happens in picturesque gardens when ruins are fabricated to create a sense of this longing, and purposefully overgrown by nature to seem like remains of grand human achievement. This use of ruins also causes the viewer to question their own existence, and as Diderot states, “reminds us of the instability of human things”.

This piece attempts to use furniture to frame a three dimensional picturesque scene. I am interested in the way this removes the animal sculpture from the pedestal, and gives it an environment with more context and meaning. Here, the candles in the chandelier symbolize the passage of time, while the overgrown marble floor provides the same feelings as the picturesque ruins that have been reclaimed by nature.

There is an anticipatory narrative in this piece, allowing the viewer to make up the story for themselves. I think that this provides a deeper connection with the animal. The strange features of this prehistoric elephant called a gomphothere also inspire curiosity and fascination in order to spark the imagination.

This fantastical rock formation was another way of framing a scene, and separating the animal from the pedestal. The miniature scale of the carriage gives a grand scale to the animal, while his comical interaction reveals the humor in the paradox of the scene. Making the carriage seem buried in the earth was also a nice visual connection to the way fossils emerge, and the excitement when they are recovered. 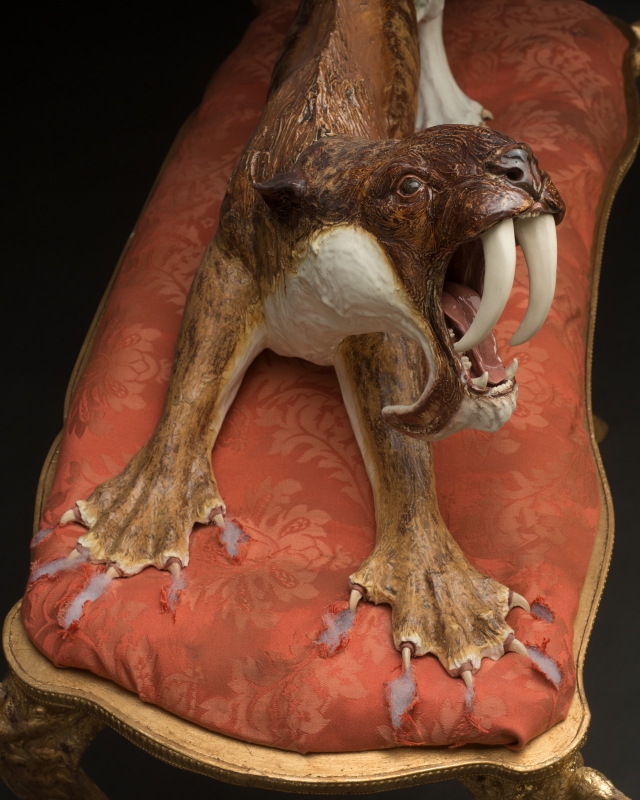 Thylacosmilus was a prehistoric marsupial predator that lived in South America. I wanted to make an animal that had more of an impact on its environment. I chose this gesture so that the cat could be clawing into a Rococo cushion.

This piece uses the ceramic furniture to display the animal instead of the pedestal. These ceramic table legs are attached to a CNC milled wooden top. The traditional rococo carvings are replaced with natural history motifs. I used ferns instead of acanthus leaves, nautilus shells, horseshoe crabs, and prehistory icons like the dodo. The viewer’s close attention is rewarded with these details.

2 Responses to Setting the Scene: Graduate Research on the Picturesque Aesthetic