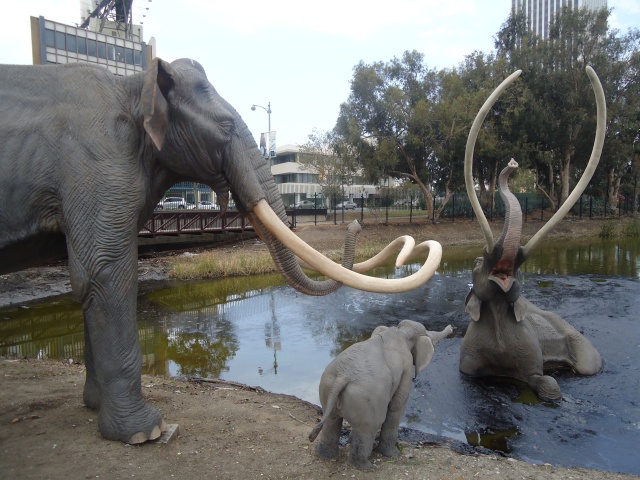 I have made it to the La Brea Tar Pits in Los Angeles! I have already had an enjoyable week here making studies of the Columbian Mammoth. These sculptural reconstructions were created for Hancock Park at the La Brea Tar Pits Museum in 1968. Local artist Howard Ball towed the life size mammoths down Wilshire boulevard with his VW Bug. They are a permanent installation in the tar lake a man made lake that dates back to the 1800’s when this area was mined for asphalt. The reconstructions show a family group, the female mammoth is trapped in the tar while the male and young mammoth are helpless to pull her free. The tar creates so much suction that a mere two inches was enough to trap a 15,000 pound mammoth. The first fossils discovered at the tar pits were from that of a saber-toothed cat (by far one of the most common animals found here) by geologist William Denton in 1875. 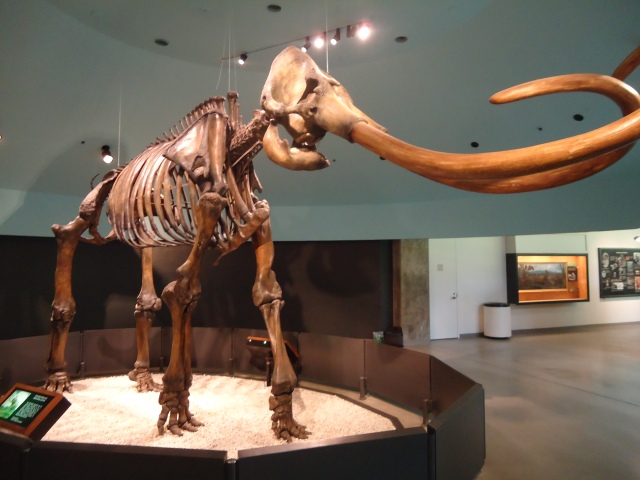 This is one of the more complete Columbian Mammoth skeletons found at La Brea. The tusks in this display are cast resin. Most tusks do not survive fossilization because they are made of dentin like teeth, and tend to decay and fall apart until only small sections and pieces can be found. Zed, a recent discovery, is the first mammoth to be found at La Brea with intact tusks, and over 80% of his skeleton has been recovered. Zed is part of Project 23, the current excavation being worked on at La Brea.

When digging a parking structure next door, the Los Angeles County Museum of Art discovered Zed among hundreds of other fossils just beneath the surface. In order to save the fossils and avoid impeding construction, the La Brea Tar Pits Museum organized the salvage of 16 fossil deposits into 23 crates. This allows the excavators to take their time preserving and cataloguing each of the hundreds of thousands of fossils that were found. The current crate #14 has been being excavated slowly over the last six years, and originally weighed 83,000 pounds.

This is pit 91, one of the regular excavation sites at the tar pits. The current grid contained bones from a giant sloth, dire wolf, and prehistoric horse.

More about Mammoths and Zed

The Columbian Mammoth (Mammuthus columbi) lived 20-40,000 years ago in North and South America. The largest Columbian Mammoths were 13 ft. tall, most had an average height of 12 ft.  Scientists believe that mammoths lived in female led herds just like today’s elephants. The skeletons of male mammoths are often isolated, suggesting that they lived apart from herds. Most of the mammoths found at the tar pits were males, suggesting that there were no family members to help pull them from an asphalt seep. 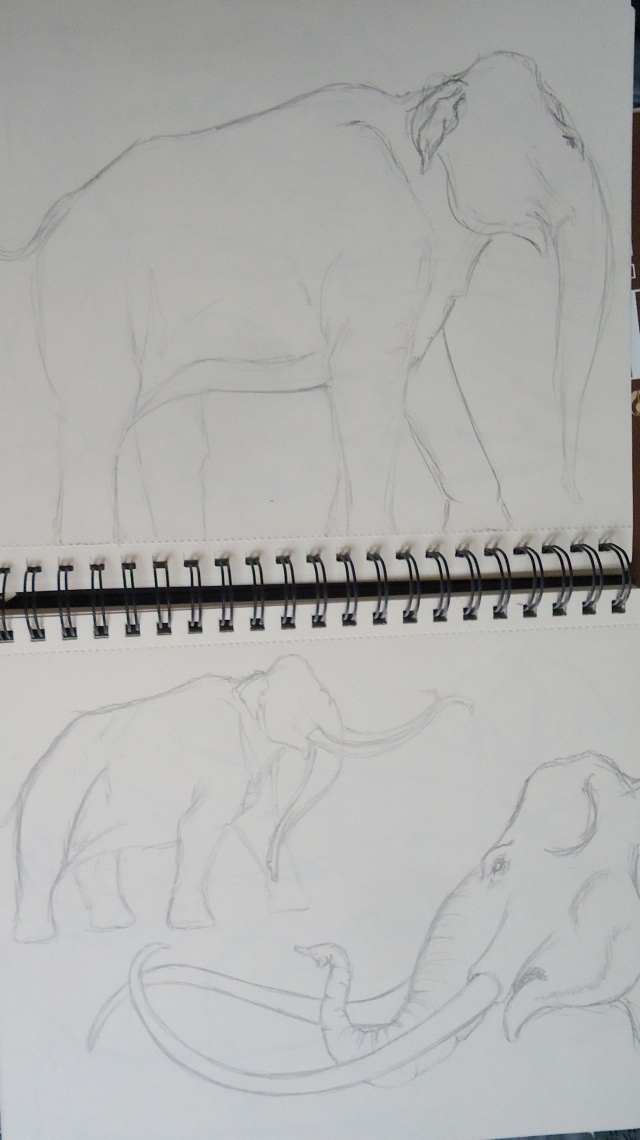 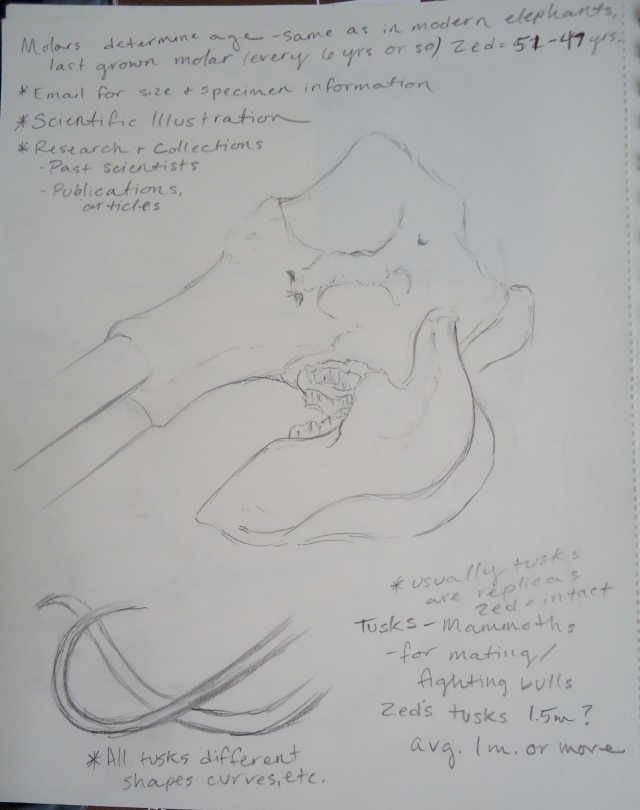 Studies from my sketchbook of the mammoth currently on display at the La Brea Tar Pits museum. Sketching the articulated skeleton helps me understand where muscles attach to bone, as well as proportions and the locations of joints.

It was not possible for me to photograph Zed’s fossil remains personally, since this is ongoing research, but I was able to find images online of what the lab has uncovered so far. This is Zed’s lower jaw. The scientists look at the molars to determine the age of a mammoth. Mammoth molars regrow at even increments throughout their lives. Using this information scientists determined from Zed’s very complete jaw that the was between the ages of 47-51 when he died.

Zed’s skull still in the field jacket is at this point too fragile to be removed completely. 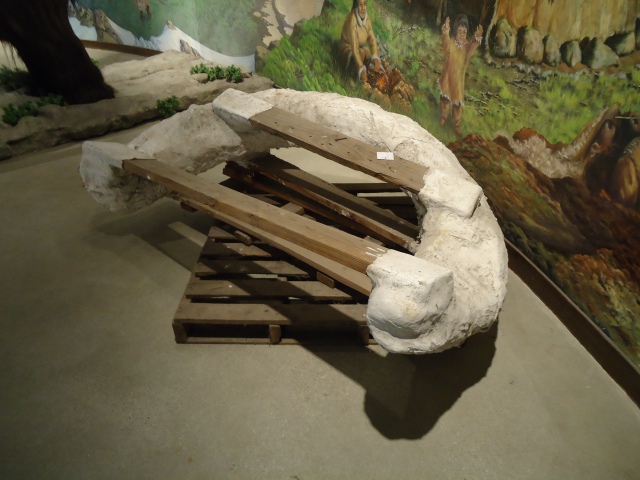 One of Zed’s tusks, still in the field jacket on display at the museum. 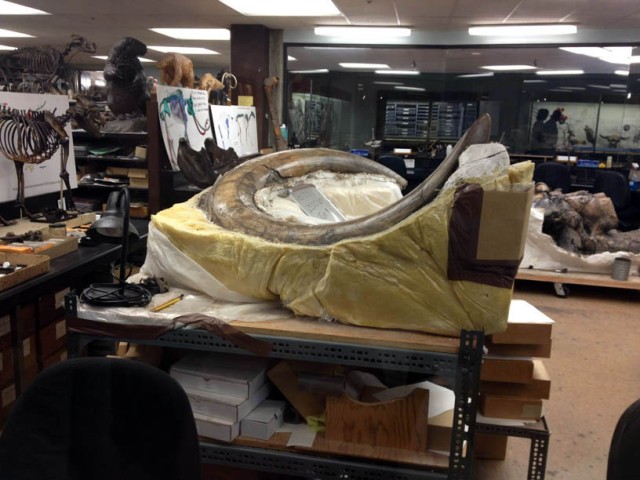 This is one of Zed’s tusks that has been prepared so far. It is the most complete mammoth tusk to be found at this site. Mammoth experts have examined this tusk to determine seasonal variations from the time that Zed lived down to the day. Because of the way tusks grow, they provide information about Zed’s nutrition throughout his life. It is likely mammoth bulls used their tusks to fight for mating rights. Zed has several healed injuries that could have come from this type of fighting. Scientists also believe that because Zed showed signs of internal damage that this could have been his cause of death. Zed did not get stuck in an asphalt seep. His bones are only partially pro-mineralized, not entirely bone or fossil, and this is extremely rare. Because of the way he died, not in asphalt, Zed was also found mostly in an anatomical position another rarity at the tar pits.

The word diorama literally means “to see through”. In natural history museums they provide a window into a time and place, preserving the animals in their natural habitats. Dioramas both educate and entertain, using visual elements and composition, as well as illusions of perspective.

The dioramas at the Los Angeles County Museum of Natural History are beautifully designed windows into ecosystems and animals from around the world. Many of the animals displayed are critically endangered now. The dramatic landscapes and compositions of these displays suspend disbelief placing the viewer up close to places and animals they might not otherwise experience in the wild. 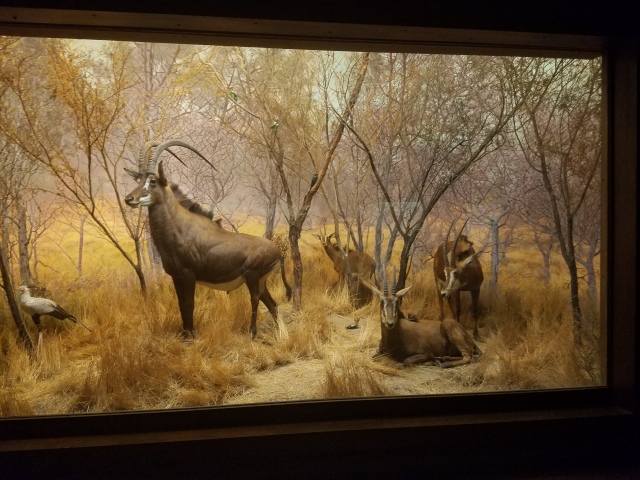 I was able to interview Tim Bovard, the museum’s taxidermist who works on many of these exhibits. His office was full of these “death masks”, casts taken from the specimens to preserve features and details in the final taxidermy. Tim has a degree in vertebrate zoology in addition to an art background creating exhibits for museums.His understanding of animal anatomy helps him in his work.

Scale models are created for each diorama. Decisions are made about showing family groups, these allow for comparisons between male and female, as well as the young of a particular species. A small study for the background is usually done on location and then used as reference along with photos for the large background mural. Plant life, and other elements of habitat are also gathered and cast or molded for use in the diorama.

Each mural is divided into sections separating the foreground from the middle ground and background. The red line here determines what will be three dimensional from the painted background. Tim says that a “drop off” is often used to create an illusion of greater space between these areas. This sometimes means an actual physical drop off between the 3D elements and 2D background. The strategic placement of plant life and rocks can make the transition almost seamless. This sense of space is very important to drawing the viewer into each scene, and creating an immersive environment. Tim also places small animals, or little discoveries as he calls them in each scene. So as you look at the larger animals you are surprised by a bird, or snake hidden nearby.

Each diorama is created with a support structure of wire frame over wood underneath. The rocks are usually a combination of plaster and aggregate that gets painted later on. Everything in a diorama is scientifically accurate to the location being portrayed. Real leaves are molded in plaster and then vaccu-formed and cut to create accurate foliage on trees. Real rocks are used as reference for sculptures. There is also a narrative element to this method of display, combining art and science to tell a story.

To learn more about he process behind the dioramas at the LA Natural History Museum, watch these videos.

The dioramas were extremely helpful for studying a variety of animals. Many of the taxidermy forms have exaggerated muscles, and the interesting gestures the animals are held in are perfect for sketching.

I also have also been using the Age of Mammals exhibit at the museum to study prehistoric animal skeletons, and then reconstruct that animal in a sketch.

The skeletons were also helpful in studying bone structure and proportions of these animals.

Even some time spent at the San Diego Zoo Safari Park helped me better understand elephant movement and walking gestures for my mammoth sculpture. 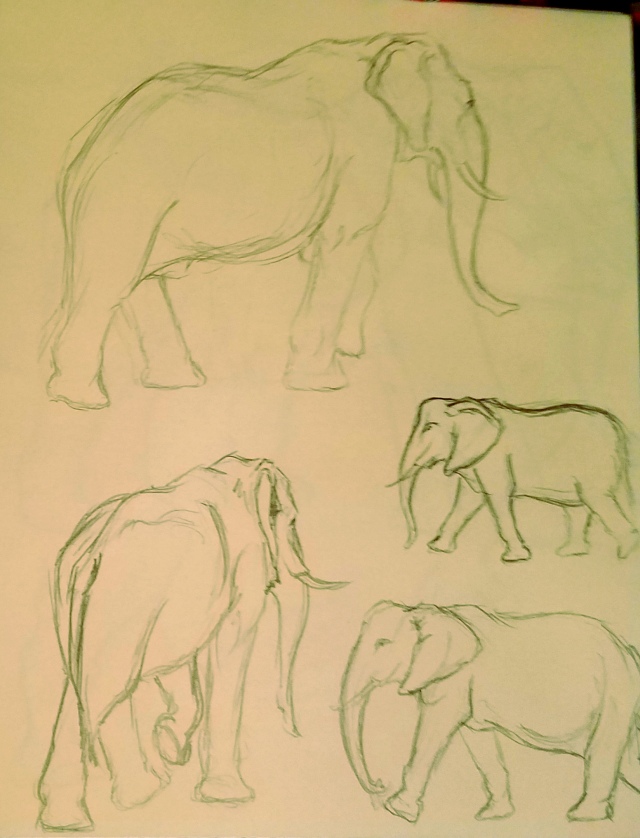 Now that I am back in the studio, I have started working on a mammoth sculpture based on my research. I always start out with some rough maquettes and small studies for gesture, musculature, and proportions.

I’m using the Asian elephant as a reference for anatomy. This is the closest living relative to the Columbian mammoth, and shares the most common physical traits. I have made large print outs of the mammoth skeleton along with images of the Asian elephant, and Asian elephant skeleton for comparison. Since the largest Columbian Mammoth was 14 feet tall, my sculpture will be 14 inches tall. Using the large print of the skeleton as a reference I can measure proportion and create an accurate reconstruction. 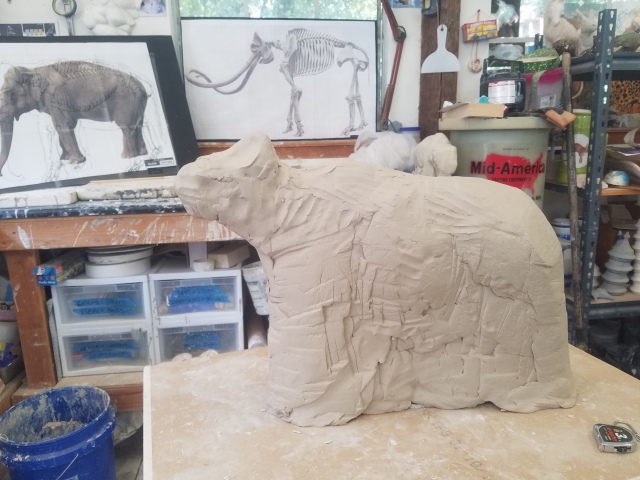 The sculpture is carved from a solid block of clay, and first I rough out the general shape.

I carve the block and add clay to areas until the proportions and musculature are correct. 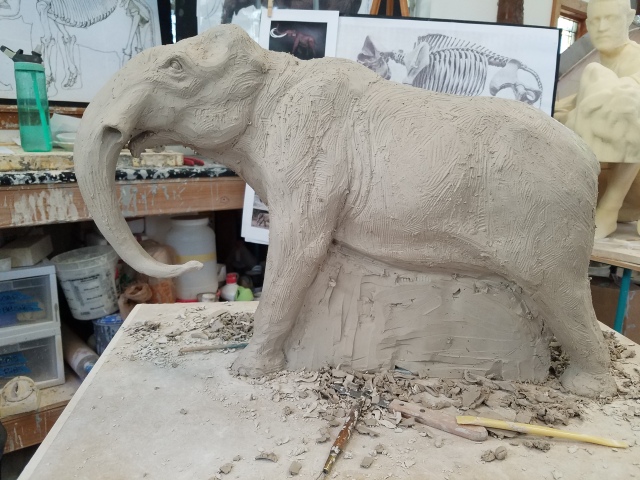 Once the anatomy has been defined I let the sculpture dry out for hollowing. The block underneath the legs can be removed as the clay dries and the legs are strong enough to hold the weight of the body. All the detail and texture, and small parts like the ears and tail, will be done after the piece is hollowed.

Cutting the mammoth into sections for hollowing. 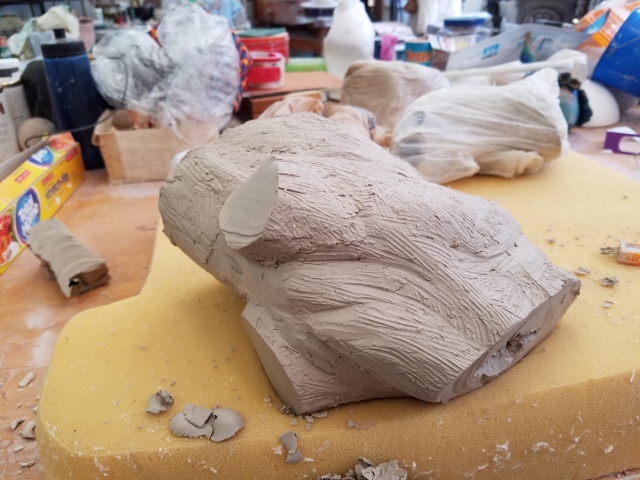 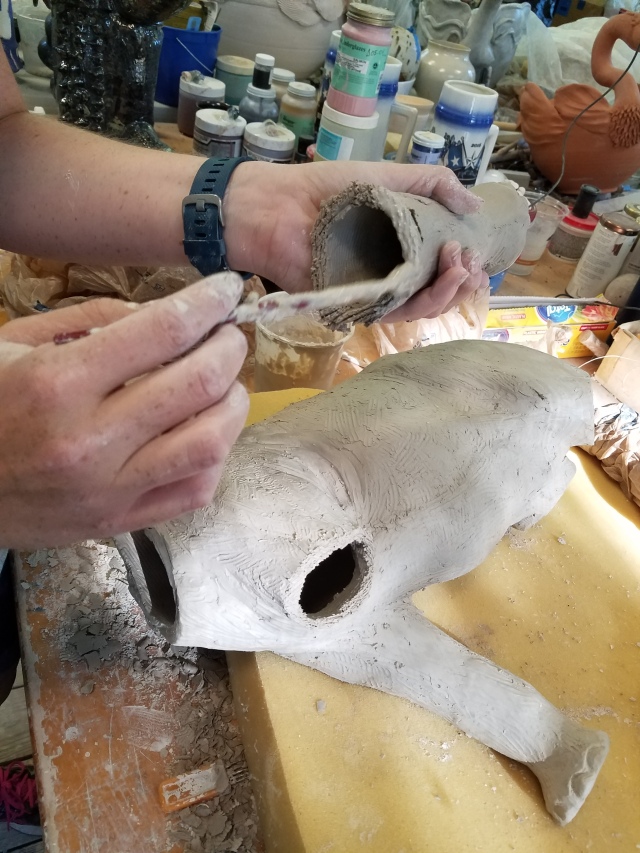 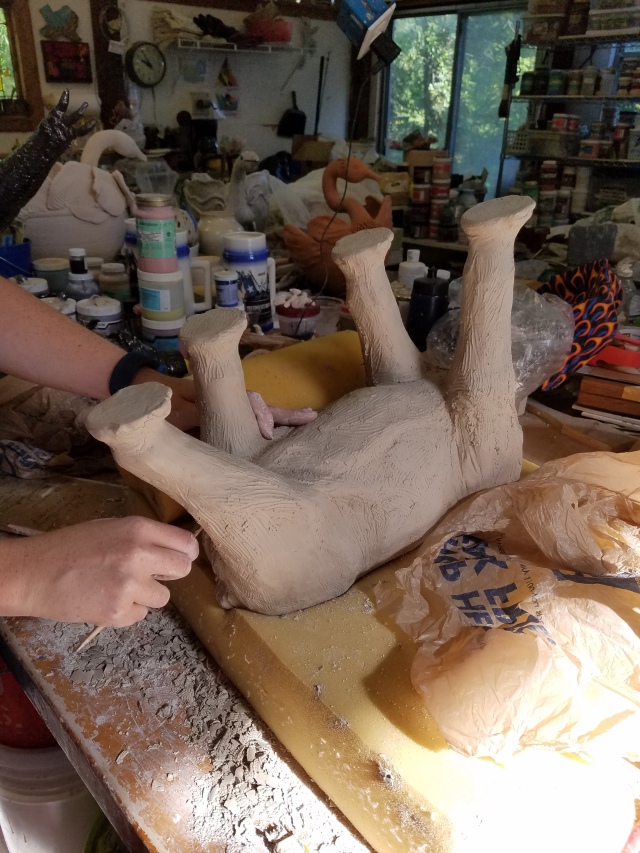 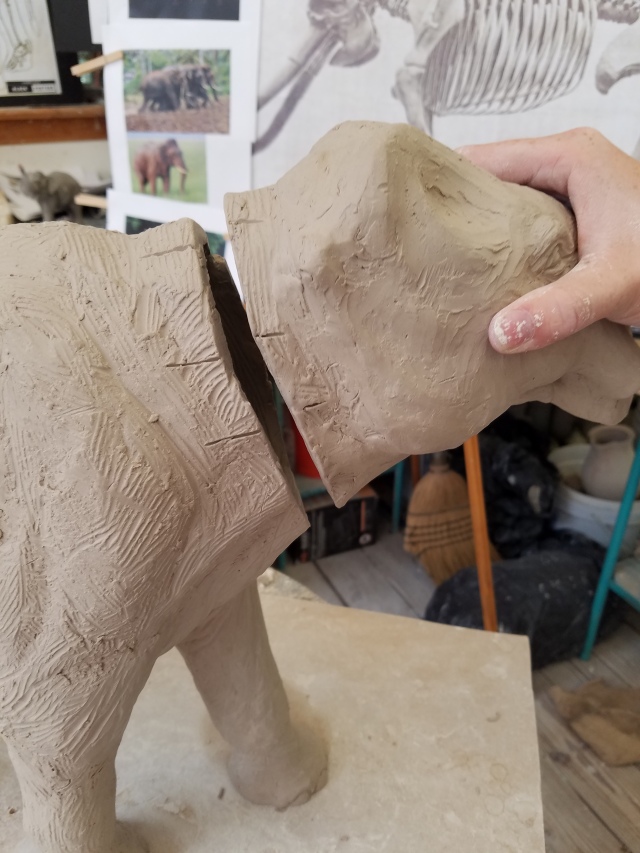 Once the hollow pieces are back together, I am able to sculpt all the details and add small delicate features like the ears and tail. The tusks will be added later, and either be made of porcelain or painted resin. 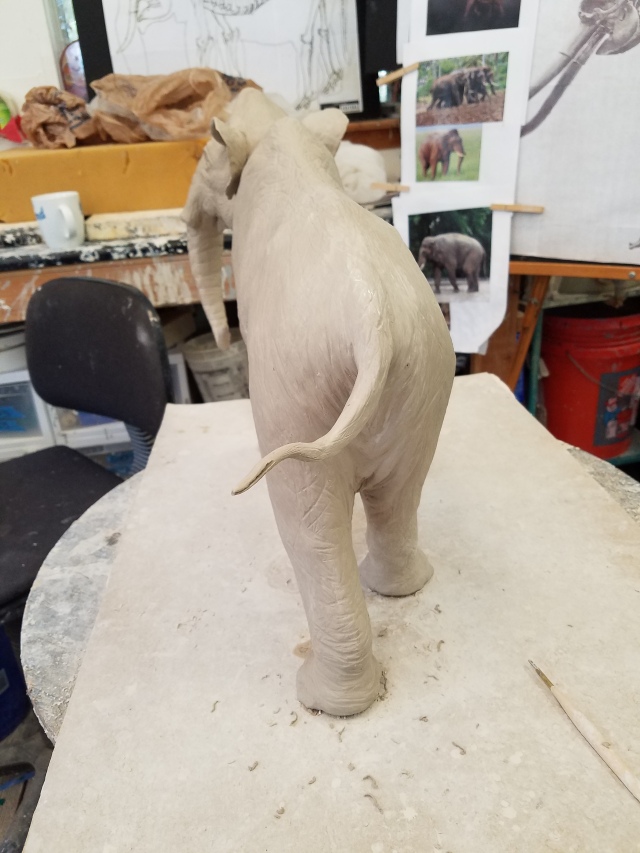 While finishing this piece I have been reading books that focus on popular extinction theory for large mammals like mammoths. I am very interested in the overkill theory that supports the idea that megafauna extinctions were caused by humans. The book Once and Future Giants by Sharon Levy explores this theory and its connections to modern day megafauna extinctions. By reading this I have learned that there are a lot of connections between the Pleistocene world that these mammoths lived in, and the climate change and human impact that affects our planet today. This research has also introduced me to scientists that are foremost in the field for they study of mammoths. I am planning to contact and interview these scientists to learn more about important features and evolution of mammoths. For example, I will be contacting an expert in mammoth tusks to find out the most common shape and size of mammoth tusks for my sculpture.

Overall, it has been a great summer of research and exploration. Seeing these specimens in person, and studying natural history museum displays will be very important to my upcoming artworks.