One of my biggest printmaking influences has always been Albrecht Durer. Durer used the intaglio technique to create engravings like this piece The Knight, Death, and the Devil. Intaglio printmaking involves engraving or etching an image into metal plates, usually copper or zinc. The lines of the image on the plate are then wiped with ink, and damp paper can be rolled through the press over the plate to absorb the ink from the engraved lines.

One of Durer’s most famous iconic images is actually a woodcut, however. This very well known image of a rhinoceros became what Europeans believed this strange animal looked like.

Durer created this image from a second hand description and a small sketch from another artist that saw what has become known as the Lisbon Rhinoceros. After researching the story of this rhinoceros, it was the animal itself and its journey that interested me even more than the image. The Lisbon Rhinoceros began its journey from the palace of a sultan in India as a political gift to the King of Lisbon. Displayed in the Lisbon palace menagerie, people flocked to see this strange animal. The King then sent the rhinoceros by ship to the Pope in order to gain his favor. On the way, the rhino stopped in Marseilles and was visited by the King of France and amazed crowds of onlookers. Unfortunately, on the next leg of the journey, a storm sank the ship, and the Lisbon Rhinoceros died at sea. Even though this animal died, it was able to live on for the next five hundred years through Durer’s iconic image.

In my own work I use reconstructions of extinct strange animals to revive the same sense of discovery and amazement that captivated people when the Lisbon Rhinoceros came to Europe. During my independent study I will be working with my own image of a prehistoric rhinoceros inspired by the story of the Lisbon Rhino and Durer’s stylized image.

Here is the sketch for the piece I will be creating in the first half of summer. The background will be created by two large scale intaglio prints pulled from 36”x 24” plates. The rhino and the rock in the center will be a clay sculpture. The surface of the piece will have slip inlay and carving in order to merge the sculpture with the prints. I will be using smaller plates to bring cut out images into the foreground.

Etching is a long process that begins with a bare plate of copper, or in my case zinc. These soft metals are able to be scratched into, and scratched lines can be etched deeper with nitric acid. This is one of my 36”x 24” zinc plates. The first step is to scour the coating off the metal using comet and scotch brite pads. This polishes and smooths the surface and removes grease from the surface of the plate.

Next, the plate is coated in “hard ground”. This is a mixture of asphaltum (tar) and mineral spirits. This mixture is able to resist the acid bath, so that only the lines scratched through the hard ground will etch.

My sculpture has started this week as well. Using a steel pipe armature to hold up the weight, the sculpture is built solid, and later hollowed out.

The roughed out form of the rhino on the rock is now ready for hollowing and then details. I will be carving into the surface of this piece to do slip inlay later on.

In order for the image I create on the plates to be enlarged, I had to rework the original drawing several times, using a large format print, and then tracing paper, and finally a transfer of the drawing to the plates themselves. 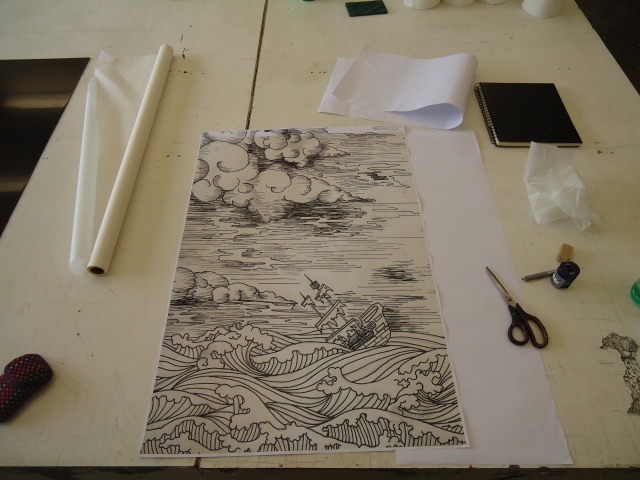 This is the large format print, a scanned, enlarged and reversed version of the original sketch. In order to print the right way from the plate, the image has to be reversed from the original.

Tracing paper is put over these prints so that the drawing can be reworked for more detail at the new larger scale. Things like the ship changed a lot from the original small drawing. 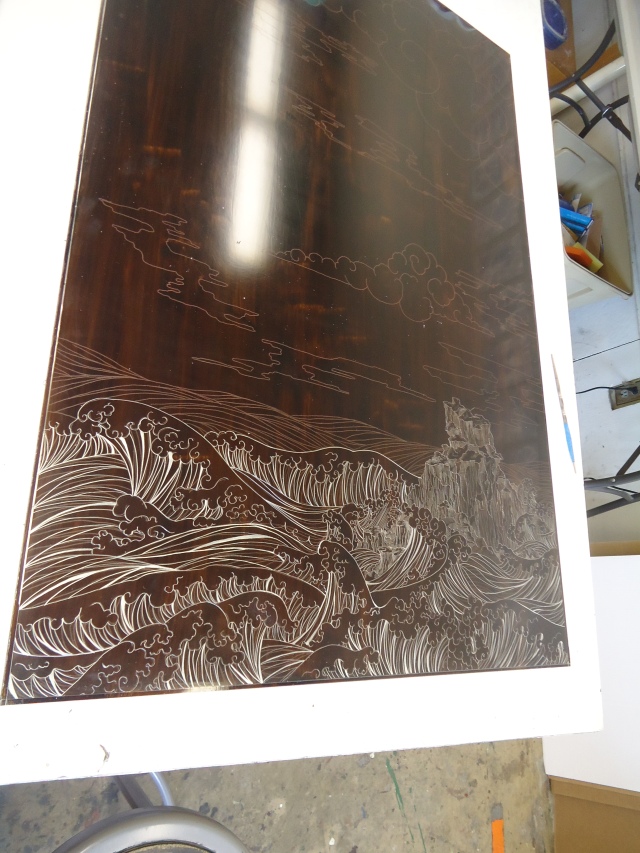 Here the lines transferred from the drawing have been traced with etching tools to cut through the hard ground coating. The plate that is now exposed in these lines is vulnerable to the acid bath and will etch deeper with each exposure in order to hold ink.

The finished prehistoric rhinoceros has now been smoothed and is ready for carving. For this piece I will be using a method of slip inlay called mishima. There are many different techniques that can be used to create this effect. I prefer using wax and carving through it so the black slip only goes into the lines I carve. This technique allows me to create cleaner, finer lines.

First, I cover the piece in white slip. This will help the piece blend in with the black and white of the prints I am creating. Next came the wax, some preliminary drawing on the surface, and then carving and slip inlay.

Before etching the large plates, a test plate was used to determine the amount of time needed in the acid to produce different line quality. This test plate was submerged for specific amounts of time, and then masked in areas to prevent further etching. By using the line quality from different parts of the large plates in each section, I was able to see which lines I preferred at which time increments. Using this time scale, I was able to know when to etch lines deeper, or mask them off on the larger plates.

The etching process begins by dipping the plates in an acid bath. The bath is one part nitric acid and twelve parts water. This is a slightly weaker ratio to allow fine lines to be etched slowly. A brush is used to remove bubbles from the surface of the plate as it etches to prevent uneven etching. 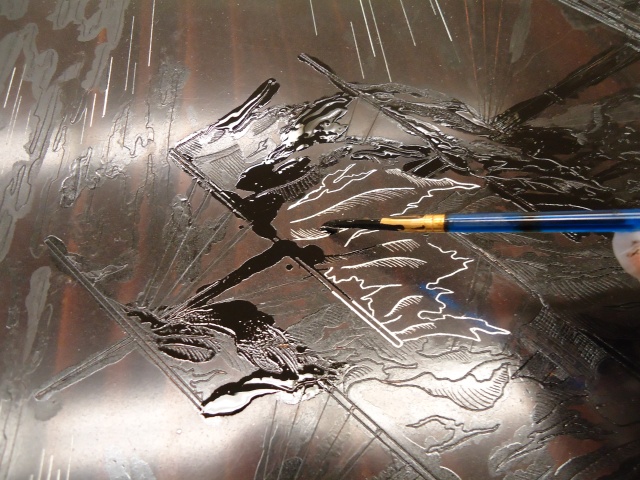 As the plate is etched certain lines are masked with hard ground to prevent them from becoming deeper. Spray paint is used in the wide lines to create aquatint. The acid works around the small dots of spray paint creating a darker area that is rougher and holds more ink.

After the etching is complete, the plates will be ready for cleaning and the “proof” prints which will determine whether more work needs to be done to them.

In the first stage of printing the plates have to be cleaned. The hard ground is removed using mineral spirits and lacquer thinner. All the lines must be clean in order to hold ink.

Once the plate is cleaned, the proof prints can be pulled. Proofs allow the artist to judge if editing needs to be done. Certain lines can be improved, buffed out, or the whole plate can be coated again for etching and reworked.

This is an example of a print station. The plate first has to be coated with ink using passes of each direction to evenly coat the surface. Several passes of wiping with tarlatan (a softened starch fabric) remove ink a little at a time. Newsprint is used to wipe the last of the ink off the surface and clean all the high points leaving ink only in the lines of the plate.

The printing press must be set with the correct pressure in order to press the paper into the lines of the plate. The paper has to be soaked in water  overnight to soften it enough to be pressed into the plate. 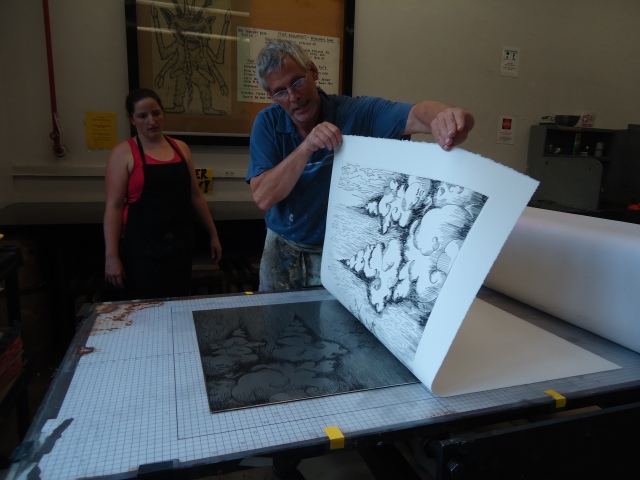 Here are the proof prints. Using these I was able to decide on marks I wanted to try and erase in the final prints, and areas that required more attention during ink wiping. 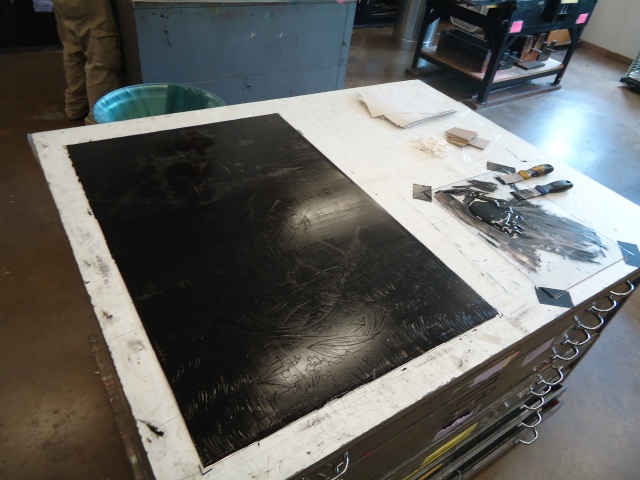 After assessing the quality of the proof prints, final prints are pulled. The plate must be completely coated with ink using a squeegee or stiff piece of cardboard. No modifiers were added to the ink in order to preserve the inks stiff nature when the print is pulled. This makes the wiping process take much longer, but the end result is ink lines that stand up and have texture on the paper. 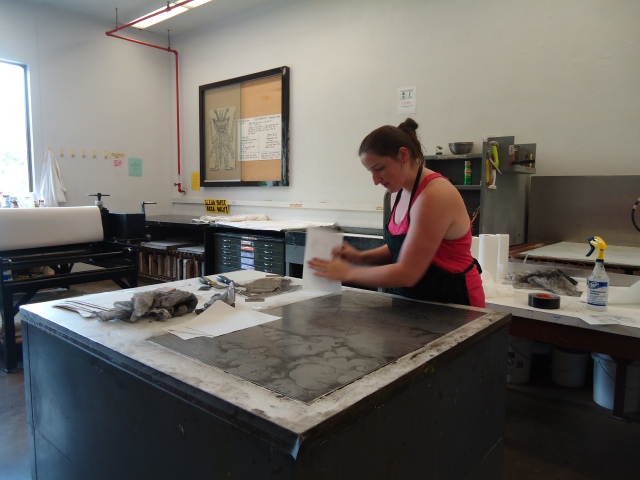 First, tarlatan cloth is used to wipe off the majority of the ink. It is soft enough to keep the ink in the lines but remove it from the smooth surfaces of the plate. Newsprint is used to hand wipe the last of the ink from the plate until the high points are smooth and clean of all ink.

The large sheets of paper we used for the project had to be soaked over night to make them soft enough to press into the lines of the plate. The paper is then dried with clean towels and laid on top of the inked plate on the press. 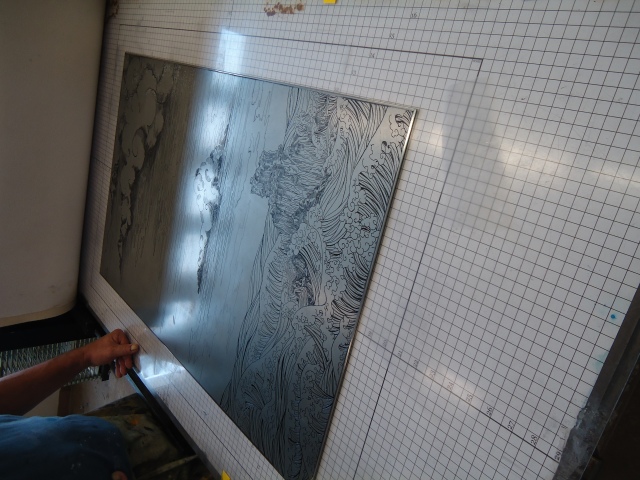 The printing press bed is tightened until it can apply the necessary pressure to force paper into the lines on the plate.

Prints are pulled off the plate diagonally so as not to make gaps in the ink from the straight lines of the plate.

The final large prints were seamed and mounted to a sheet of thin plexi glass. This corner shelf has a routed groove that supports the plexi at a slight curve around the piece. The final display merges the sculpture with the printed background to create an illusion of space and provide a scene for the narrative to take place.