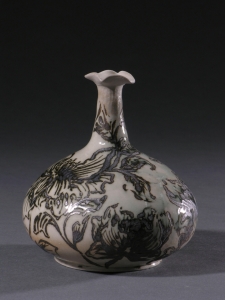 This spring my concentrations at the Kansas City Art Institute were focused on learning both throwing and mold making.

In my thrown work I rediscovered my passion for functional pieces. Most of these pieces are influenced by Chinese celedon ware, as well as scroll paintings and woodblock prints from Japan, China, and Korea. I chose these influences because I feel that the way these cultures represent nature lends itself to the forms I chose to work with and the idea of finding beauty in nature. 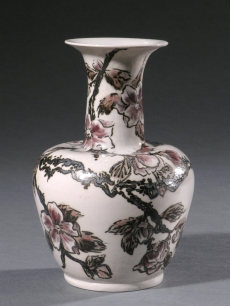 Slip casting began by creating a cup and saucer. These peices were slip cast in porcelain from a single basic cup and saucer form. Each piece was then altered to reference the different views of Mt. Fuji portrayed in the woodblock print series by Katsushika Hokusai. My focus was to create a changing landscape that reflects the power and beauty of nature through use of the multiple.

The “linear element” piece was one that allowed me to learn how to cast a found object and use the mold making process to create a piece that reflected my own interests. The bones were cast in terra cotta and then raku fired with no glazes. The piece is about three feet long, and a foot wide. As an installation, it hangs suspended from the ceiling by sinew that is tied to each bone. Below is the artist’s statement for this particular piece.

Natural Selection was originally a Darwinian idea proposed as an integral part of evolution. It is based on the development of certain traits in a species that increase with each generation and allow greater reproduction and survival.
I have interpreted that idea into the bones that I cast as my linear element. My goal was to create an animal that was based in the ideas of natural selection, one that could be changed at will through rearrangement. Therefore, if the environment that the animal is presented in changes, so do the characteristics of the piece. In this way, the animal becomes alive, changing and responding to its surroundings in order to survive. I used the multiple to create many bones, each of which could be cut and altered into the appearance of something else. My main focus was the rib bone, which when hung together, create the ribcage, and the main body of the animal. After that, different jaw bones allowed me to leave small teeth, or add large canines, in order to accentuate the combination of predator and prey. The smoked effect on the bone color acts as a change in outer appearance, and a method of camouflage. Sinew then holds the bones in place, and is the method for changing them.
The decision to hang the piece was due to the intention of intimidating the viewer. When the idea of Natural Selection was first introduced in the 19th century, it caused a major disruption in society. Natural Selection challenges the longstanding exalted place that humans hold themselves in, and the ideas that we are the chosen invincible species. The idea itself suggests that we are not creatures under the protection of God, who’s decisions are reflected in nature. On the contrary, it puts us back onto the evolutionary ladder, with the same chances as every other species.
The notion has as strong of an impact today as it did in the 19th century. The work itself is meant to prey on this impact and enhance it, making the viewer self aware, causing them to feel like an inferior species.